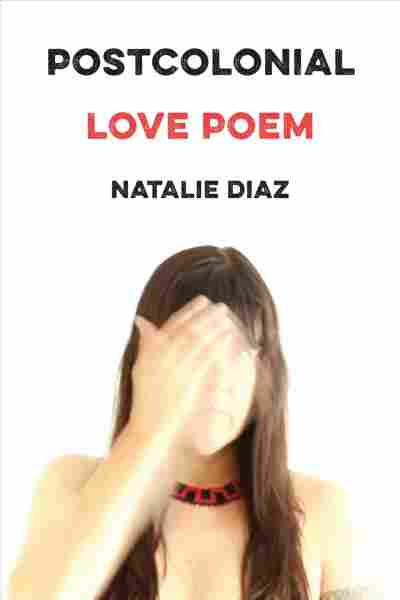 So we begin with this question: How do you create meaning when the language itself undercuts the meaning you are trying to create?

Natalie Diaz, whose incendiary When My Brother Was An Aztec transformed language eight years ago, addresses these ideas in her new poetry collection Postcolonial Love Poem through authorial choices that center Native perspective in content, point of view, agency, and normalization of Native culture and mythos — in short, the myriad ways the white gaze is normalized in the literary imagination and which readers are socialized to accept as the default normal as well.

Consider the first few lines of the titular and opening poem:

“I’ve been taught bloodstones can cure a snakebite,

can stop the bleeding—most people forgot this

depending on which war you mean: those we started,

before those, millennia ago and onward,

those which started me”

Here, the things of daily Native experience foreign to the daily white experience — “bloodstones,” “snakebite” — are deservedly normalized and unexplained because to do otherwise would be to other the self and pander to the white gaze.

Here, too, Diaz’s specific repetition “after the war ended. The war ended” in a single line calls attention to the idea of never-ending and simultaneous wars that have been the ethos of American policy; “those we started,” echoed a line later by “those which started me” interrogates the direction and agency of violence — of inheriting a legacy of violence; of inheriting a body upon which others enact their violent desires without your provocation or consent; “my body is an argument I didn’t start,” echoes another contemporary woman poet of color, Morgan Parker, understanding this weaponized projection of violence onto a brown female body.

Like Joy Harjo’s Conflict Resolution for Holy Beings, in this poem, and in many others in the first third of this collection, Diaz allows herself a lyric directness in attention to the line, a leaning into narrative moments of grounding within the poem. “Police kill Native Americans more/than any other race,” Diaz writes in “American Arithmetic” before adding:

“Native Americans make up less than

This directness functions to make known the violence against indigenous bodies that has reached epic proportions; fueled by a necessary ethical impetus for clarity, the urgency to communicate exact meaning over abstract interpretation is prioritized here.

The representation of violence against Native peoples is a driving engine of the book. Whether it be historical or present violence against the general Native population and culture, the specific violence levied at girls and women, the violence of the Christian religion, the cyclical violence the male body engages in, a violence — sometimes loud cacophony, sometimes mute ghost — saturates these pages. Look here at the introduction of violence into world of the narrator’s brothers in “Catching Copper”:

They keep their bullet

on a leash shiny

as a whip of blood.”

As with Aztec, the depth of the substance abuse and mental illness conditioned by reservation life and the legacy of colonialism are represented via the narrator’s broken brother; the violence his brokenness creates in the family, haunts Postcolonial Love Poem as well. Consider the exquisite “It Was the Animals,” which can be seen as a conversation with the titular poem from When My Brother Was An Aztec, the narrator’s brother has found a piece of what he desperately believes to be Noah’s ark; the narrator sits with him through his delusions and evidence of self-harm, but what destroys her is the flip from realism to her brother’s assumed drugged-out fantasy given flesh:

“It was the animals—the animals I could not take—

they came up the walkway into my house

cracked the doorframe with their hooves and hips,

marched past me, into my kitchen, into my brother,

before the water rises, pushing the narrator’s coffee cup away from her table as she watches:

a hull of bones, lit by tooth and tusk,

lifting his ark high in the air.”

Here, Diaz revels in one of the greatest marks of her poetic genius: her move from realism to the fantastic made real, bound and anchored by theme, language, metaphor and allusion as the doubled layering creates a construction in which the brother’s demons haunt him just as he haunts both the family and the text.

Interestingly, unlike other poets working in the postcolonial space — like Sudanese American poet Safia Elhillo, for example, whose decolonization of language requires the presence of Arabic to both take up space among the colonizer’s English that she is writing in and to act as a marker of Islam amidst the colonizer’s forced Christianity that Africa was pressed to believe in — Diaz does not interrogate the colonization of language and belief systems through the use of the Mojave language; that work is separate and in a different space. Postcolonial Love Poem is written in the language of the colonizer — reframed and reclaimed and re-envisioned, yes, but still in the language of the colonizer. The space of the Mojave language — what the colonizer repressed and nearly destroyed and Diaz has famously spent seven years working to preserve from extinction — is separate, to be kept sacred and safe from that aggression ever again.

In the very present absence of the Mojave language, Postcolonial Love Poem becomes a very present love poem to self and community, post colonialism. Poet June Jordan wrote that for marginalized individuals existing within a society predicated upon their destruction “self-love is a revolutionary act.” Here, keeping the risen phoenix that is the Mojave language safe and hidden is the revolutionary act.

“Aha Makav is the true name of our people given to us by our creator,” Diaz writes in one of her rare uses of her mother tongue. “Translated into English, Aha Makav means the river runs through the middle of our body, the same way it runs through the middle of our land,” she adds before finishing: “This is a poor translation, like all translations.” This is, perhaps, also an oblique explanation of the present absence of her mother tongue.

One can only go forward, centering perspective and culture as the lion, not just the hunter, now tells the story.

Hope Wabuke is a poet, writer and assistant professor at the University of Nebraska Lincoln.