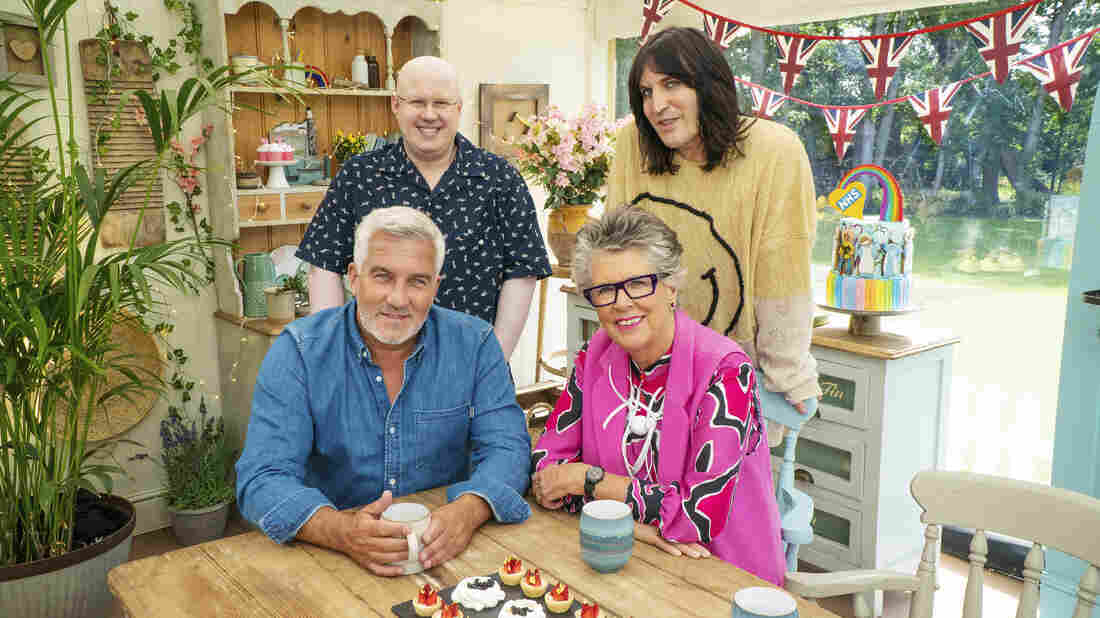 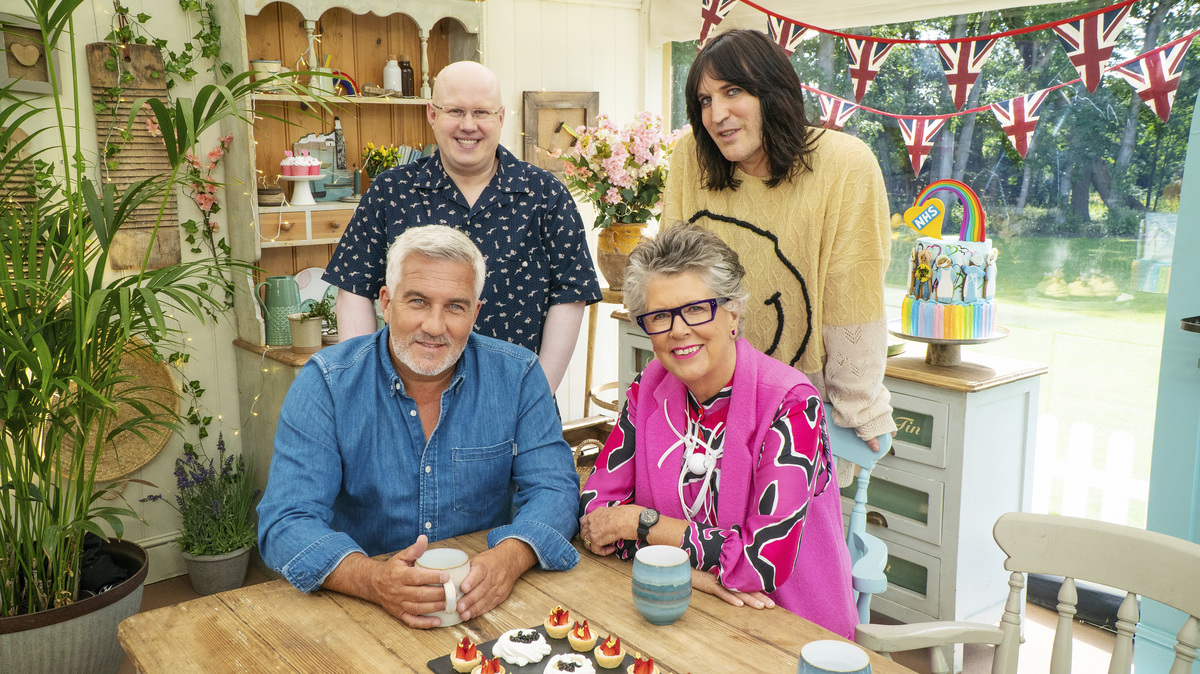 Comedian Matt Lucas — top left — joins cohost Noel Fielding and judges Paul Hollywood and Prue Leith in the tent for the new series of The Great British Baking Show (as it’s known in the U.S.)

Some day, historians will look back on this time and ask how Americans kept their cool during a pandemic, a recession, and a stressful presidential race. Those historians may be surprised to find the coping mechanisms included a British reality TV show.

The Great British Bake Off — or The Great British Baking Show, as it’s technically called in the U.S. — does not have backstabbing alliances or obstacle courses. It’s just home cooks in a big white tent baking cakes, pastries, and biscuits — that is, cookies.

The show’s 11th season is now on Netflix. Produced in the midst of the pandemic, with its bakers and hosts living in their very own Bake Off bubble — and with a new cohost, comedian Matt Lucas, best known in the U.S. for the sketch show Little Britain.

“I did not imagine that I’d become a television host,” Lucas says, “and I had never even seen the show until I went really to try out for it … I got this call on the Friday saying, would you test for the Bake Off? And I said, I’ve never seen the Bake Off. I know it’s really, really popular, but I mainly watch soccer and documentaries. So my agent said, well, look, just watch an episode tonight and if you like it, you can test on Tuesday. And so I went for dinner with my family, and then I came home and I put on an episode — and then another one, and then another one. I thought, wow, this show’s brilliant!”

On his host audition

The audition was mad. So I went to a garden center and went up to people and interviewed them about which sort of horticultural accessories they were buying … one of those sort of half indoor-half outdoor garden centers. And people were saying to me, well, what have you got in your garden? And I said, well, I don’t have a garden. I don’t have any outside space where I live. And they were saying, you don’t really know much about horticulture, do you? And I said, I know absolutely nothing about it. And people were saying, well, why are you hosting this program about gardening? I said, well, I don’t know. It’s been very quiet lately. And people were telling me, oh, you’ve really come down, your career’s really [come down].

Our real job, I think, is to launch the challenges and to look after the bakers … reminding them that they know what they’re doing, and they’ve done it many times before, and they’re going to be fine.

I didn’t really appreciate it quite at the time, but it’s the highest rated show in the U.K. at the moment. It’s such a big show here that they need to audition very many people to find out who’s going to get the job of host. And they want to keep that process as secret as possible. And so I think people just thought I was mad. Why was I wandering around the garden center when I didn’t know anything about gardening?

On his responsibilities as host — including calling out the remaining time in a challenge — and how he sees his role.

Well, our real job, I think, is to launch the challenges and to look after the bakers — and the bits they tend to show in the final program are when we’re cracking jokes — reminding them that they know what they’re doing, and they’ve done it many times before, and they’re going to be fine. They just need to do what they do.

On what it was like to be in the quarantine bubble

It was a bit like being on a kind of summer camp, you know, and we had activities in the evening, Prue, who’s one of the judges, did some did flower arranging classes. And I did bingo. I don’t know if you call it bingo in the U.S., but … I called out bingo and Paul Hollywood, who’s the other judge, he had his incredible pizza oven brought down from his home. And he had a couple of evenings where he cooked sort of 150 pizzas for everybody … how lucky I am I to not only have one of the greatest jobs in television, but also one of the only jobs in television right now? This show was made in the summer. We went before any other show.

On making fun of the judges, and whether he ever gets told to tone it down

Very occasionally. I go a bit too far and everyone laughs and Prue laughs. And then she says, “I’m laughing, but that’s not going in the show.” But they both of them have a great sense of humor. And they were both very generous in that regard. And also, I was the new boy. So I was kind of finding out where the boundaries are. And they would play jokes on me, too. And it was good for putting the bakers at their ease. You know, they come in and they were so tired and they were so stressed and, you know, they might be real dad jokes that me and [co-host] Noel make, but the bakers would come up to us afterwards and they said, thank you so much for making me laugh. It really put me at my ease. So, you know, it has a purpose to it. It’s not just us showing off.

On some unwelcome visitors in the tent

It’s really interesting to see how successful you can be by just following a recipe. Having said that, I still haven’t followed any recipes myself. I’m happy to eat the cakes, but I’m not a great baker.

There’s a whole ecosystem, a wonderful community of flies and bugs and wasps and bees and hornets, and they gather — there’s not much you can do — they gather in, you know the pointy roof of the tent? There’s a couple of those points, and they gather up in those points. And at the end of filming every day, they … pull down the sides of the tent and release a smoke bomb to encourage the insects to leave. And they all do leave. And then it’s really hot in the morning, and people are cooking with sugar, and they all just return.

On whether he himself can bake

Absolutely not. I once tried to bake a cake, but already I started tampering with the recipe and the cake, I mean, talk about soggy bottom. I mean, this cake was just — if you had to give it a name, you’d call it wet egg cake. I mean, that’s all it was. It was inedible, and I didn’t go anywhere near it. But it’s interesting because the thing about baking is, it’s science. And when you get a recipe, particularly an old recipe, there will be a reason why you should put it in at exactly that temperature for exactly that amount of time, at exactly that spot in the oven. It’s really interesting to see how successful you can be by just following a recipe. Having said that, I still haven’t followed any recipes myself. I’m happy to eat the cakes, but I’m not a great baker.

On the best thing he ate during the taping

Do you know, I don’t want to give anything away. There’s a jelly art design round, and that was not only a feast for the eyes, but there were some really, really delicious cakes in that round. It was the moment where everybody upped their game. And it’s really impressive.

This story was produced for radio by Mallory Yu, edited by Sarah Handel and adapted for the Web by Petra Mayer