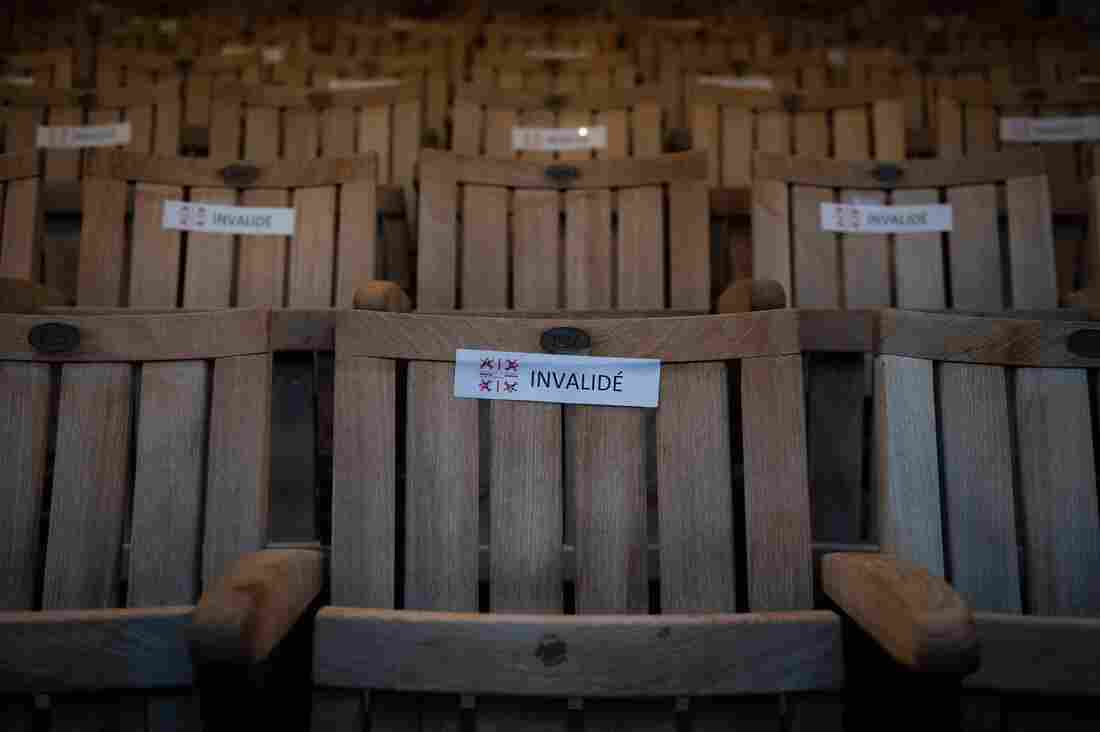 A photo shows seats with stickers to respect social distancing due to the COVID-19 pandemic, in the Theatre de l’Archeveche in Aix-en-Provence, southern France, on July 23, 2020. Clement Mahoudeau/AFP via Getty Images hide caption 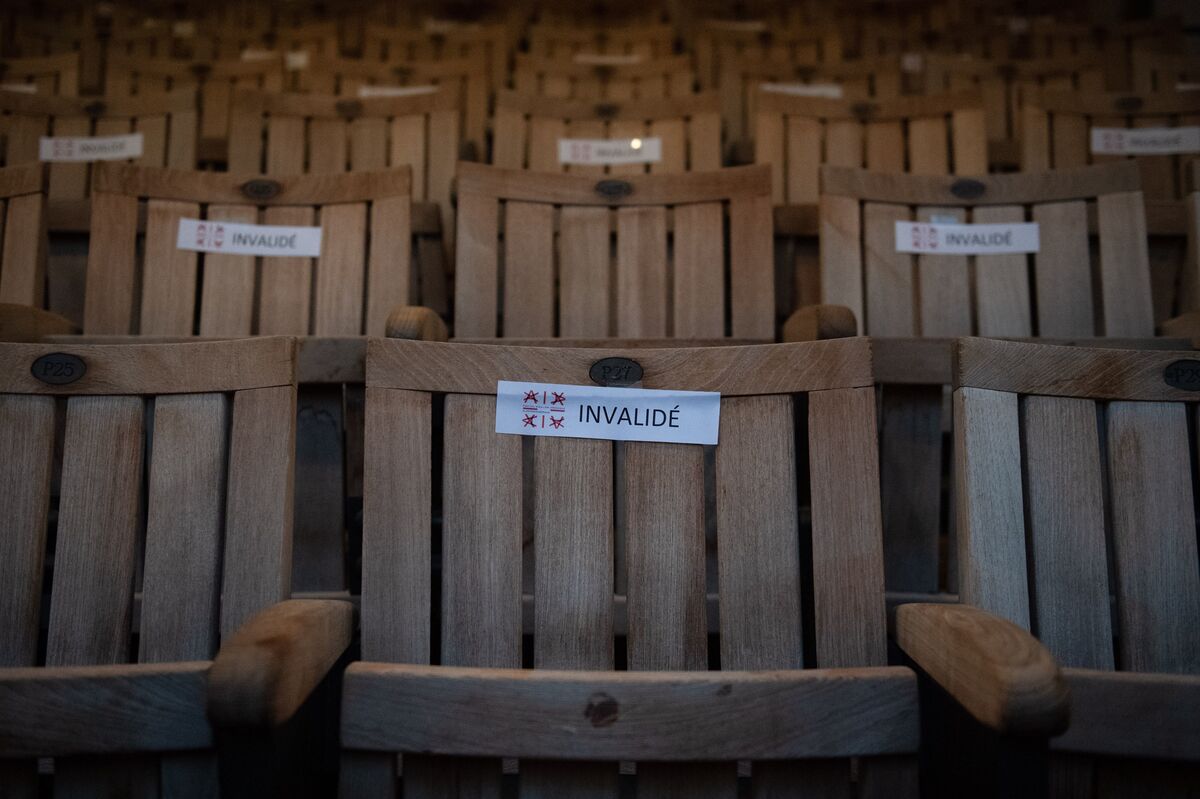 A photo shows seats with stickers to respect social distancing due to the COVID-19 pandemic, in the Theatre de l’Archeveche in Aix-en-Provence, southern France, on July 23, 2020.

Inside a small, sunlit rehearsal space in the east of Paris, a brass quintet practices an original composition for an upcoming musical theater performance called Death Breath Orchestra. But the musical’s opening has been pushed back yet again due to an upsurge in the virus. France, like its European neighbors, has been hit hard by a second wave of COVID-19 and officials warn of a possible third wave this winter.

The pandemic has dealt a particularly heavy blow to those who make their living in the arts, as cultural venues like theaters and concert halls have had to close their doors for months. In the U.S., some artists have turned to philanthropic or community support to get by. But in France, dancers, musicians, even the set-builders, costumers and lighting designers who work on the production enjoy regular unemployment support. Hanno Baumfelder is one of the Death Breath Orchestra musicians. He says he’ll be OK even if the show doesn’t go on.

“Once you’re officially recognized as a working artist, you’re assured of having a vital minimum,” he says. “It’s based on how much you work. But even if it’s not much, you’ll have a fixed sum to get you through.”

Baumfelder is referring to France’s special unemployment system for performing artists and technicians, known as Intermittence de Spectacle, that takes into account the irregular nature of their work.

According to the online journal Mediapart, the régime salarié intermittent à employeurs multiples (system for intermittently salaried workers with multiple employers), as it was known when first introduced in France in 1936, was initially designed to support development of the technical crews of the country’s burgeoning cinema industry. Their specialized skills were rare at the time, in part because of the irregular (and thus, for many, unattractive) nature of film production. Intermittence provided a solution: the right to publicly-funded unemployment benefits for each day that these techniciens didn’t have work on a film project.

The system has expanded over the years to include other cultural sectors such as theater, music and dance, and today counts approximately 250,000 beneficiaries. In order to qualify, each one has to accumulate a certain amount of time as an employee on artistic projects, clocking a minimum of 507 hours of paid work during a one-year period.

In May of last year, French President Emmanuel Macron promised to maintain the current system for the duration of the pandemic, announcing that unemployment benefits for intermittents would be guaranteed until Aug. 31, 2021.

Macron stressed the importance of access to culture for everyone. “We thank all of those who’ve created and innovated during these difficult times,” he said. “Culture is absolutely essential to our lives as citizens.”

Although rehearsals were allowed to continue throughout France’s second lockdown this past fall, culture venues remained closed to the public, even though stores and other businesses were allowed to reopen in early December.

That decision drew sharp criticism from many art workers, who crowded Paris’ Place de la Bastille just before the Christmas holidays to protest.

I’m living inside a society where culture has been given a lot of value. Coming from an American culture, it took a little while to adjust to that.

But choreographer and dancer Liz Santoro, who moved to Paris 9 years ago, says the status of artists in France is exceptional. “I’m living inside a society where culture has been given a lot of value,” she says. “Coming from an American culture, it took a little while to adjust to that.”

Santoro, who began her dance career in New York City after graduating from Harvard University in 2001, says the special unemployment system for artists is a lifeline in a profession with high job insecurity. “It’s not to say that having intermittence makes life easy, it’s still a major hustle,” she says. “But it allows me to not feel constantly stretched so thin.”

In New York, she had to teach pilates on the side to make ends meet. In France, she’s a full-time artist who runs a successful experimental dance company, Le Principe d’Incertitude, with her partner.

Intermittence, she says, has allowed them both to “actually have the space and time to continue to be artist[s] on a daily basis,” despite a year of postponed projects and aborted plans. “It’s an enormous luxury,” she says. “It has changed my life.”

It’s a luxury that labor organizers have fought repeatedly to keep during the intermittent system’s 84 year existence. “We’re privileged !” said Nicolas Dubourg, president of the SYNDEAC — a national trade union for publicly-funded arts and cultural organizations.

“There is a powerful arts scene in France that knows how to organize,” says Dubourg. “They know how to demand an economic regime that works for them. They explained what it means to have irregular jobs and how a system of solidarity could work. And they got what they asked for.”

It’s an example that has not gone unnoticed in the United States, where culture workers and activists have been gathering support for President-elect Joe Biden to name a cabinet-level Secretary of Arts and Culture or to resuscitate the depression-era Federal Theater Project.

The growing U.S. movement seeks to include the sector in a national economic recovery plan at a time when many American artists, unlike some of their French counterparts, have had to stop creating altogether due to financial hardship.