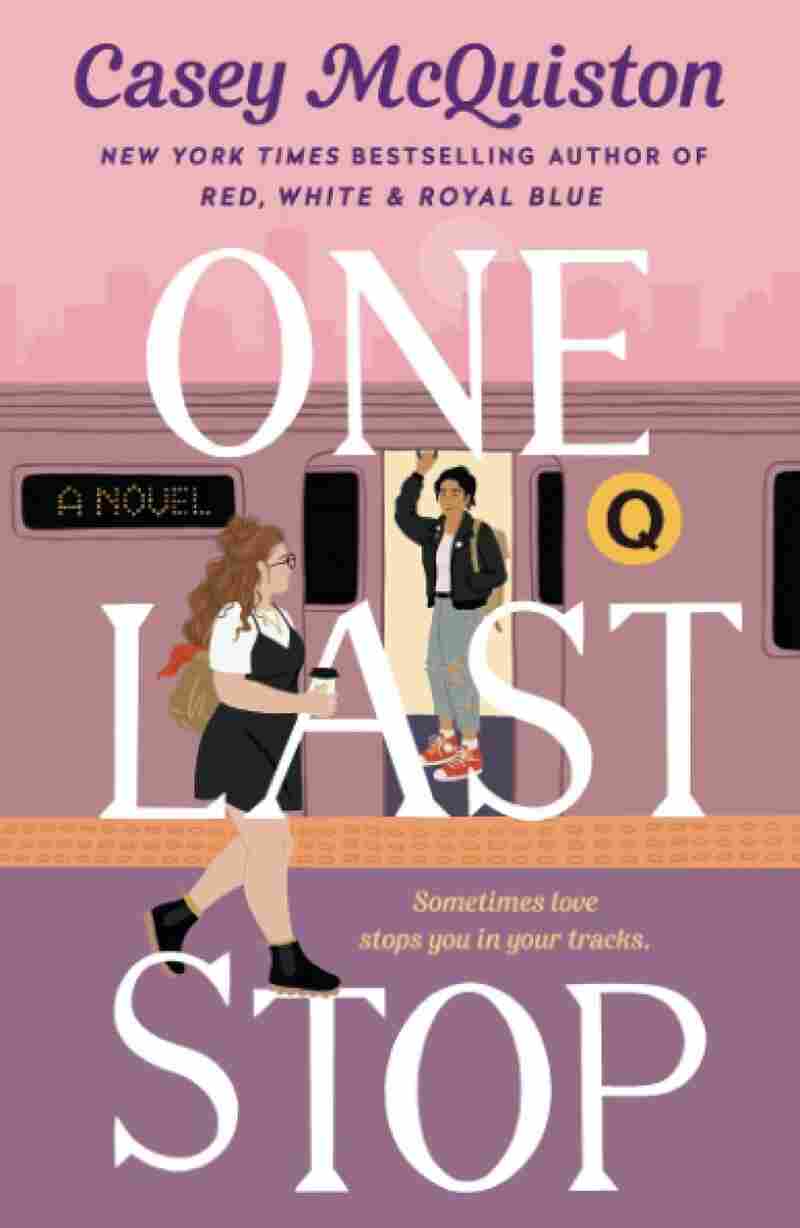 In her sophomore romance One Last Stop, Casey McQuiston has managed to do what no one else has: Make the New York City subway sexy and magical — and make readers feel so five minutes ago for not having our own public transit meet-cutes.

Even during rush hour, with cars brimming with jostling bodies, McQuiston’s characters seem to find defining moments of intimacy on the Q line. When August moves to New York for college, the last thing she expects is to become best friends with her roommates, find a community with the drag queen crowd in NYC, become a waitress at a pancake diner despite zero experience, and fall for Jane, a time-traveling, leather jacket-wearing, kissable punk rocker from the 1970s who’s stuck on the Q train for all of eternity.

Sparks fly from the moment August locks eyes with Jane, by which I mean actual electrical impulses caused by the chemistry that August’s friend Myla surmises has tethered them to each other. Jane has no idea why or how she got stuck, and no recollection of her past, but she seems to be on every Q train August is on.

It’s fascinating to see that no one but August has caught onto Jane’s constant presence; when August describes Jane’s movements around the train, she says, “Not a single passenger notices her sudden presence; they continue their sudoku puzzles and mascara applications like she was there all along. Like reality bends around her.” The bustling crowds of people filtering in and out of the subway make it easy to be anonymous — and for such a fantastical plot to work in a place like NYC.

But when August sees a sign that says the Q will be closed at the end of summer, she is determined to bring back Jane’s memories and figure out a way to free her. Before they know it, every train ride evolves into an escapade to Jane’s edgy and adventurous past, lush with delicious dumplings, parties, cross-country trips, punk rock music, and romantic relationships … which may or may not involve some real-life reenactments as August tries to trigger Jane’s memories.

Let’s just say that getting stuck on a completely empty train surrounded by the twinkling Brooklyn skyline is anything but an inconvenience, especially when it becomes the perfect backdrop for date night. August loves saying that the Q represents “a time, a place, and a person” because of the way it shapes her life and that of so many others without anyone realizing. But the city itself is just as much of a dazzling participant in the late night parties, steamy rendezvous, and initiatives August and her friends set up to prevent the gentrification of that beloved pancake diner.

August tries to keep her distance, knowing nothing will come of a relationship with a girl stuck in time. But the more Jane becomes part of her life and her friendships, the more August realizes she wants Jane to stay in this timeline – and the harder she tries to make that happen.

How do we fight to keep someone with us when their existence is outside the rules of space-time continuum? Trying to figure out how McQuiston will resolve such a seemingly impossible task is only half the fun.


This conundrum serves as the biggest yet most unique conflict of the novel: How do we fight to keep someone with us when their existence is outside the rules of space-time continuum? Trying to figure out how McQuiston will resolve such a seemingly impossible task is only half the fun; the other half is spending time in the company of a found family of memorable characters whose laugh-until-you-cry quality banter (and seances) will make readers feel right at home. Last Stop is by and large a humorous romance, replete with syrupy moments of love and ride-or-die friendships, but the complex themes of familial relationships, gentrification, and identity temper the levity.

The conversations around identity in particular demonstrate that — to a certain degree — Last Stop is not just an evolution of McQuiston’s exquisite craft, but an extension of her debut Red, White and Royal Blue. In that book, coming out to the world and the fear about the lack of acceptance are a large part of the story. In Last Stop, coming out has already happened and acceptance is unequivocal. Queer relationships of every form are normalized and healthy, and the characters are fully-realized people who are beautifully diverse, but also much more than their identities.

It would’ve been interesting to read Jane’s perspective about this evolution, as someone who witnessed the 40+ years’ worth of changes, was still fighting for LGBTQ rights when she disappeared and is now seeing a more inclusive society and experiencing a bit of a culture shock.

Even so, McQuiston delicately juxtaposes the past with the present, evoking nostalgia for classic music (and terrestrial radio!) and beloved institutions, while brewing possibilities for a more accepting society.

One Last Stop is an electrifying romance that synapses into the dreamy “Hot Person Summer” kind of story you wish you were a part of. McQuiston is leading the charge for inclusive happy-ever-afters, radiant with joy and toe-curling passion, and bursting with the creative range to make anything from electricity to social activism sound sexy.

Kamrun Nesa is a freelance writer based in New York. Her work has been featured in The Washington Post, Bustle, PopSugar, and HelloGiggles.