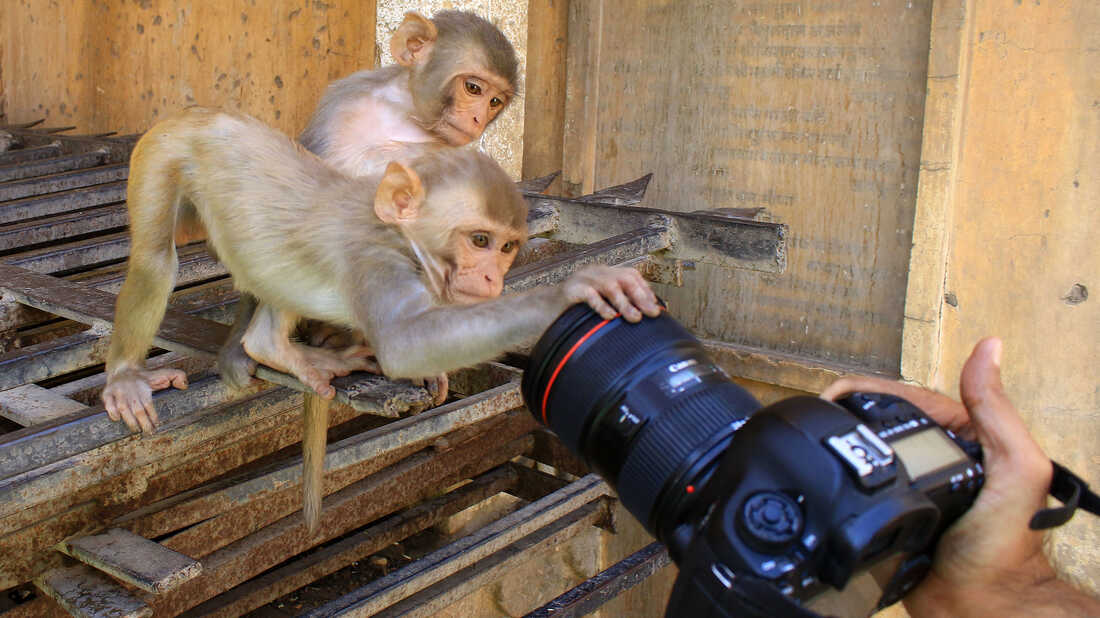 Macaques check out a camera in Galta Ji Temple in Jaipur, India. Monkeys have been known to sneak into swimming pools, courts and even the halls of India’s parliament. One attorney told author Mary Roach about a macaque that infiltrated the medical institute and began pulling out patient IVs. Vishal Bhatnagar/NurPhoto via Getty Images hide caption 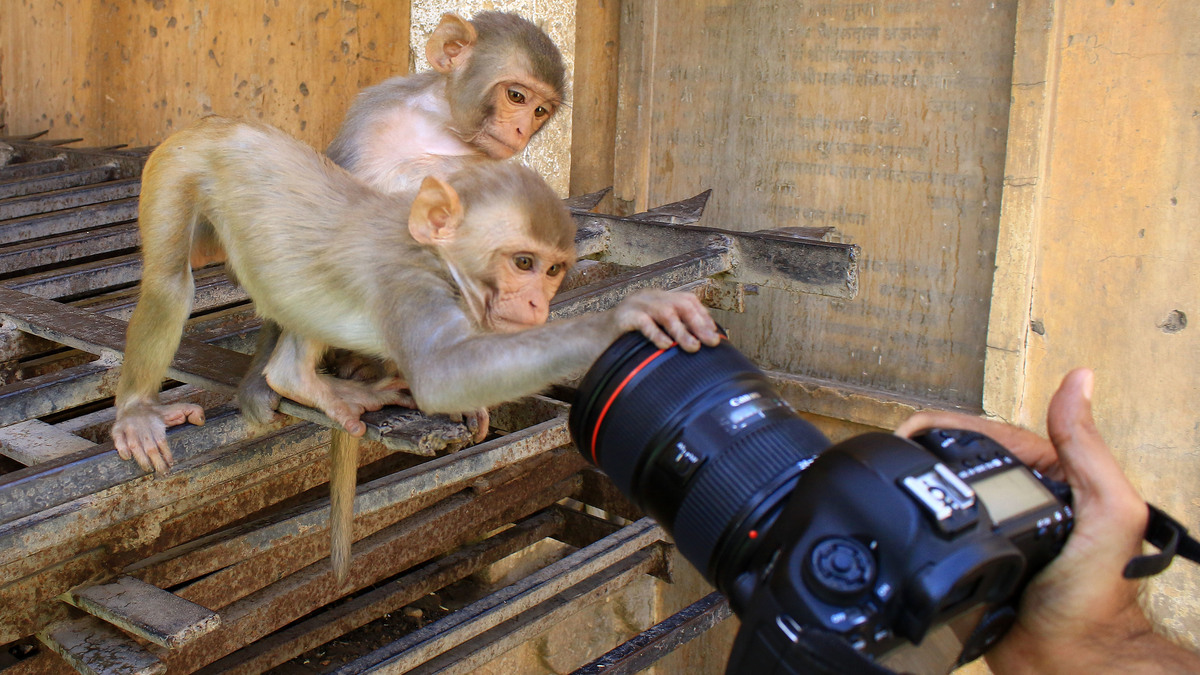 Macaques check out a camera in Galta Ji Temple in Jaipur, India. Monkeys have been known to sneak into swimming pools, courts and even the halls of India’s parliament. One attorney told author Mary Roach about a macaque that infiltrated the medical institute and began pulling out patient IVs.

Animals living among us often ignore the rules we try to impose on them. Science writer Mary Roach experienced this first hand when she was accosted by a group of macaque monkeys in India.

“I was kind of asking for it,” Roach admits. “I walked up this trail where I knew there were a lot of macaques and I walked up holding a bag of bananas.”

At first, nothing happened. Then Roach saw a monkey pop its head up from behind a boulder, “kind of like the bandits waiting for the stagecoach.” Just as that monkey stepped into her path, another monkey darted up behind her and snatched the bag of bananas.

“I don’t know if they were a team, like ‘I’ll distract her and you grab the bananas,’ … or whether they were competing bandits,” she says. “But anyway, I got mugged.”

Roach reports that the monkeys’ mischief extends beyond bananas. Macaques have been known to sneak into swimming pools, courts and even the halls of India’s parliament. One attorney told Roach about a macaque that infiltrated the medical institute and began pulling out patient IVs.

“If somebody was getting, you know, a glucose drip, [the monkey would] suck on the needle like it was a popsicle,” she says.

But it’s not just monkeys that are causing chaos. Roach writes about a variety of animal misbehaviors in her new book, Fuzz: When Nature Breaks the Law. As part of her research, she learned how to examine wildlife “crime” scenes (when a bear or cougar attacks a human) and how people prevent elephants, emus and bears from destroying their property. 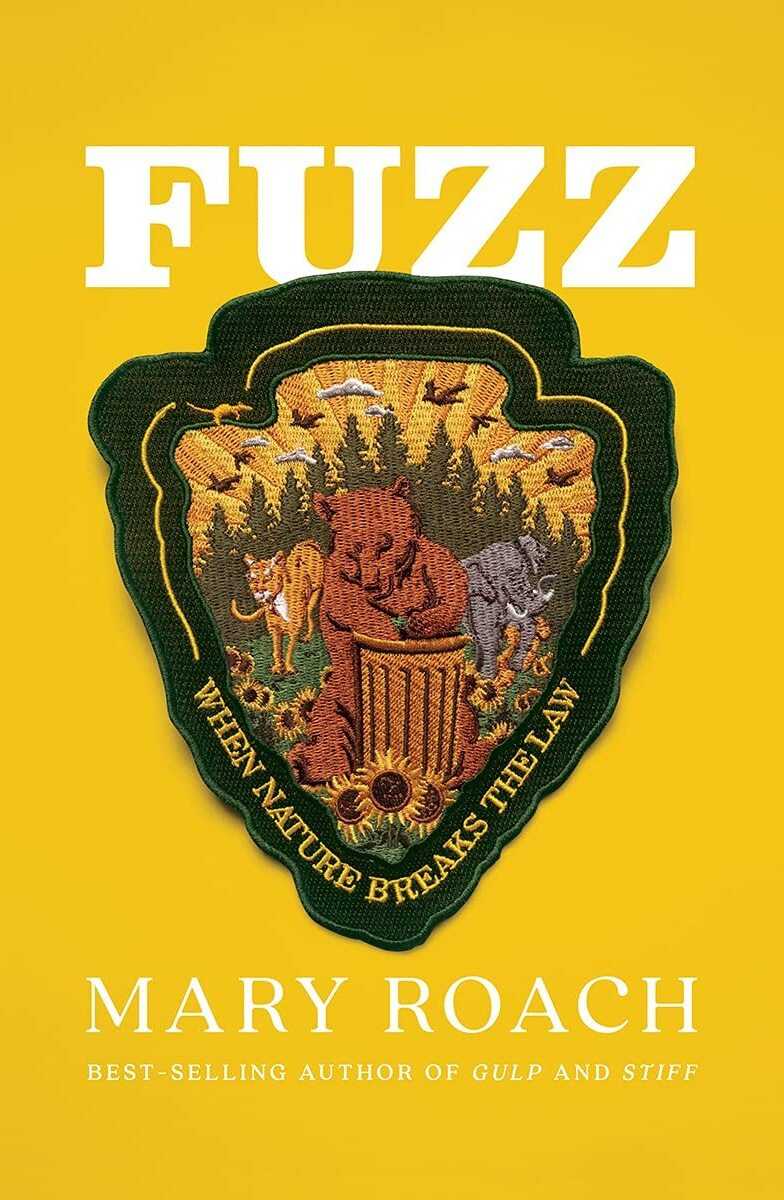 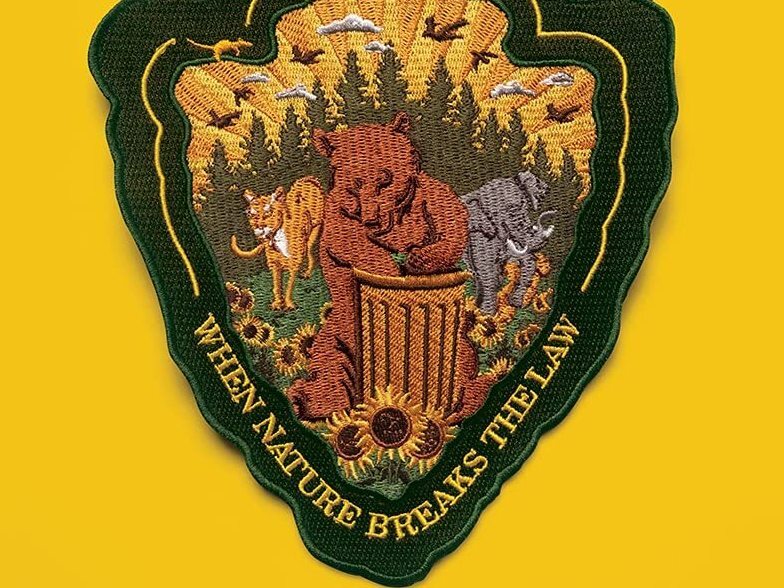 What happened was I was flailing around looking for a book topic, as happens every few years, and I got interested in the forensics of wildlife crime — not when the animals are the “criminals,” but when the animals are the victims. So I got interested in the forensics of animal trafficking, specifically a woman who published a guide for wildlife law enforcement on how to distinguish real versus fake tiger penis that is dried, which is sold medicinally. And I thought, that’s kind of a bizarre expertise, and I spoke to her and I kind of got interested in wildlife forensics. Unfortunately, I wasn’t allowed to tag along on any open cases, and I always like to be on the scene in my books. And so that was a dead end. But as often happens, it morphed into a related topic, in which I kind of turned it inside out: What if the animals were the perpetrators of these “crimes”?

This is from a 1906 book called The Criminal Prosecution and Capital Punishment of Animals. And I initially thought: Is this an elaborate hoax? But it’s very well documented. And the individual who wrote it was a scholar and a linguist, and it has several appendices that have the legal documents in the various languages of origin, many of them Latin, and I realized it is real. The caterpillars, needless to say, did not show up in court that day. But the magistrates, or whoever was in charge, went ahead with some legal proceedings and decided, well, there will be alternate land set aside for the caterpillars. And, you know, that took some time to do. By that time, of course, the caterpillars had pupated and were no longer eating the crops and everybody went away happy. …

The caterpillars, needless to say, did not show up in court that day.

Wild animals are the province of the state. So the way that the author explained it was that this was a way for these magistrates, these leaders, to say, “we are so powerful that we control even nature. We can resolve these problems because we have ultimate dominion over nature and over you, the population, and we will step in and be all powerful.”

On examining the scene when a wild animal attacks a human

There are a lot of fascinating similarities with a crime scene where a human has killed another human. In other words, the scene of the “crime,” if you will, is taped off. The officers come in, they secure the scene, they’re gathering evidence, putting the little evidence-flags down. They have to do it very carefully because there may be a bear or a cougar in the region — because these animals tend to cache their victim and hang around, and come back and feed again. So [the officers] come in very carefully and well-armed, but they’re gathering evidence. And the first thing that they’re having to figure out is — and this is not something that cops on CSI would do — the first thing they need to figure out is what species killed this person. Was it a human? Was it a cougar? Or was it a wolf? Or was it a bear? And so we learned all the, kind of, hallmark telltale signs of a bear attack versus a cougar attack. And they kill very differently and for different reasons. …

There are a lot of fascinating similarities with a crime scene where a human has killed another human. In other words, the scene of the “crime,” if you will, is taped off.

Then you move on to actually identifying the individual. And this was amazing to me because, if you have a suspect — in other words, if you trapped an animal on the scene, say a bear — you, if you were the predator attack specialist, would look at the DNA of the animal versus the DNA of the victim, and you’d be establishing a link. And if the link wasn’t there, the suspect is released. There was a case up in Canada where two bears were trapped and they were not the right bear and they were let go. It has these fascinating overlaps with the human jurisprudence system.

On bear break-ins in Aspen, Colo.

French door handles — the building code forbids those because it’s so easy for a bear to just push down and push in. Anybody with a paw can do that. You’re not supposed to use even a hollow door knob, because the bears can crush that, get a grip with their teeth, crush it and turn it. Then, obviously, automatically opening doors are a problem. There are bears that walk into ski resorts and hotels just through the automatic door. That makes it very easy. 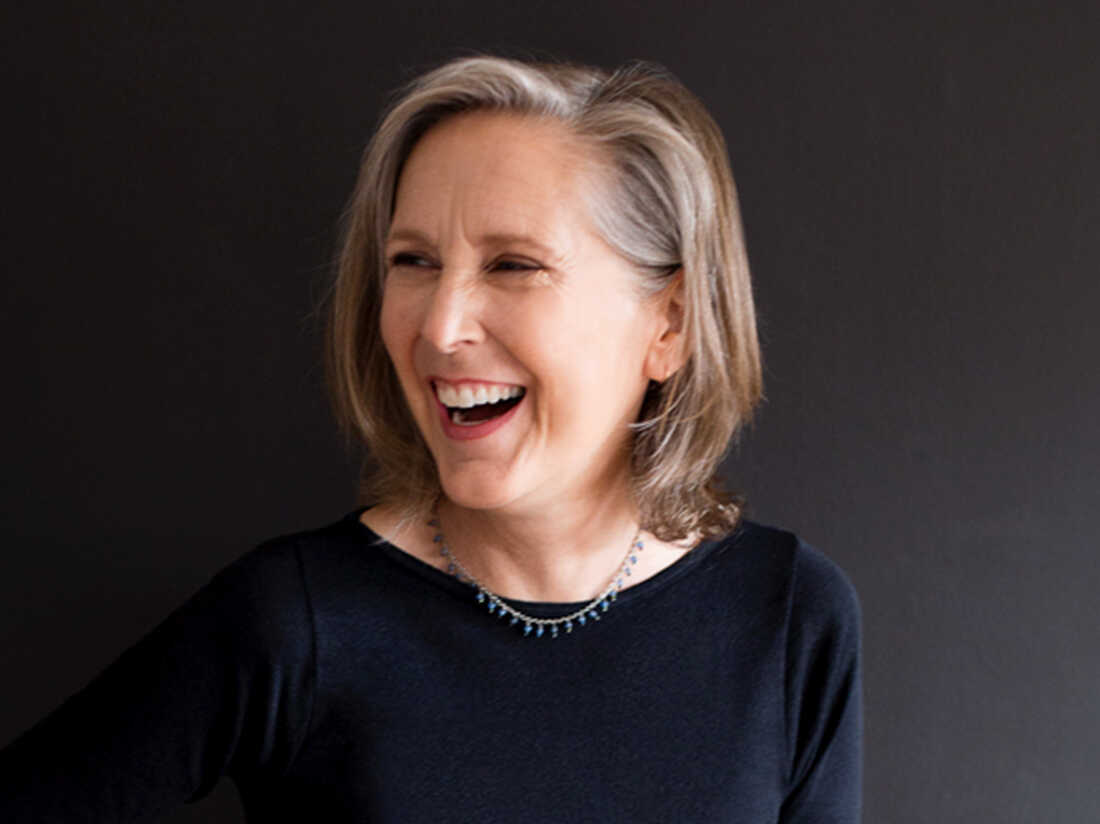 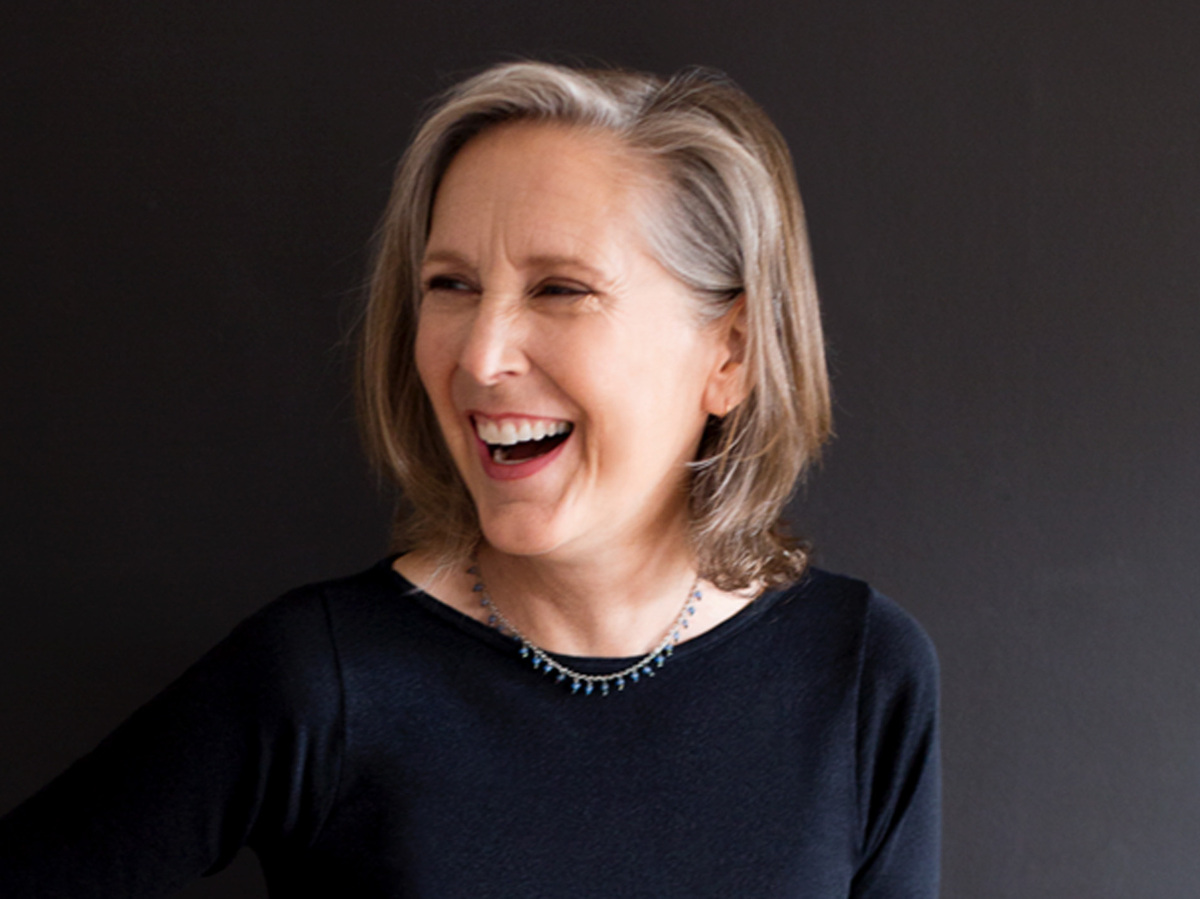 So they’re very, very resourceful and sometimes very delicate in their depredations. This officer told me that they’ll sometimes see a bear has reached in, taken out a carton of eggs and set it aside. … They’ll pull the door off its frame, but instead of knocking it, you know, throwing it over the deck, they’ll just lean it against the wall next to the frame of the door. They’re quite resourceful, but also sometimes quite surprisingly delicate. They’ll come into a house on the lower floor, go upstairs through the living room to the kitchen, not knock anything over, just go straight to the fridge, open it up, take out what they want and then go.

On people killed by elephants in India

[Elephants are] social animals. They move around in groups and they eat a lot of food. They’re very big animals. So they start running out of food and they tend to look to farmer’s fields. Imagine you’re a villager and you’ve put the crops in and they’re starting to be ready to harvest and this group of elephants comes in, and, first of all, tramples a lot of it and also starts to eat your bounty there. That’s an upsetting thing. It often happens at night, so you’ve got people from the village running out, maybe with fire on a stick or loud noises just trying to scare them off in a way that’s quite chaotic. And so you have elephants freaked out and panicked, and you have people running around and screaming in the dark. … Elephants are not preying on people, they’re not stalking them and killing them. But they’re large and you just need to get knocked over or stepped on and you can be killed. So that is often the way it goes down.

There’s a homebrew kind of a fermented drink called haaria. Elephants enjoy very much, and it’s quite fragrant — they can smell it inside a home. So people will try to bring it inside, thinking to keep it safe from the elephants, which is a very bad idea because an elephant can very easily take down the wall of the structure to get at this fermented drink. And elephants, when they get drunk, they’re, for the most part, not a mean drunk. But sometimes if it’s a male elephant in musth, which is kind of a period of hormonal tumult, you don’t want to be around a drunk male elephant in musth because they can be very aggressive. Otherwise they tend to kind of wander off and wrap their trunk around themselves, one study reported, and just sleep it off.

On how a flock of emu outsmarted the Australian military

It was a group of farmers in Western Australia, I think 1932, who were dealing with a large mobs of emus that would come in and feast on their grain, their wheat. And they contacted the military and first asked, “Can we borrow some machine guns?” And the military said, “No, you cannot borrow our machine guns. However, we will send Gen. Meredith and his men and they will take care of the problem.” So Gen. Meredith shows up with a coterie of machine gunners who set themselves up, waited for the emus to come. Emus were very good at not ever really getting within range. They also seem to be able to withstand the bullets. I think they weren’t withstanding them, but at some point it seemed to Gen. Meredith that these birds were invincible. He was actually quite awed by their ability to withstand this onslaught of bullets. I think the men [had bad aim.] But in the end, Gen. Meredith withdrew with his machine gunners, and the problem continued for the farmers. The emus basically won.

Sam Briger and Kayla Lattimore produced and edited the audio of this interview. Bridget Bentz, Molly Seavy-Nesper and Deborah Franklin adapted it for the web.