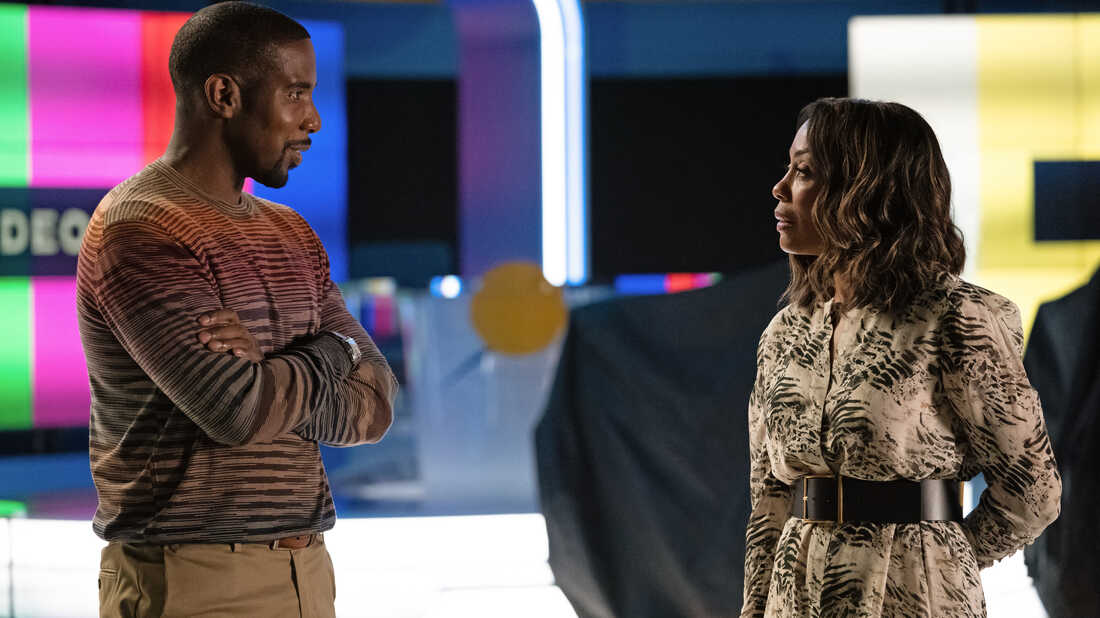 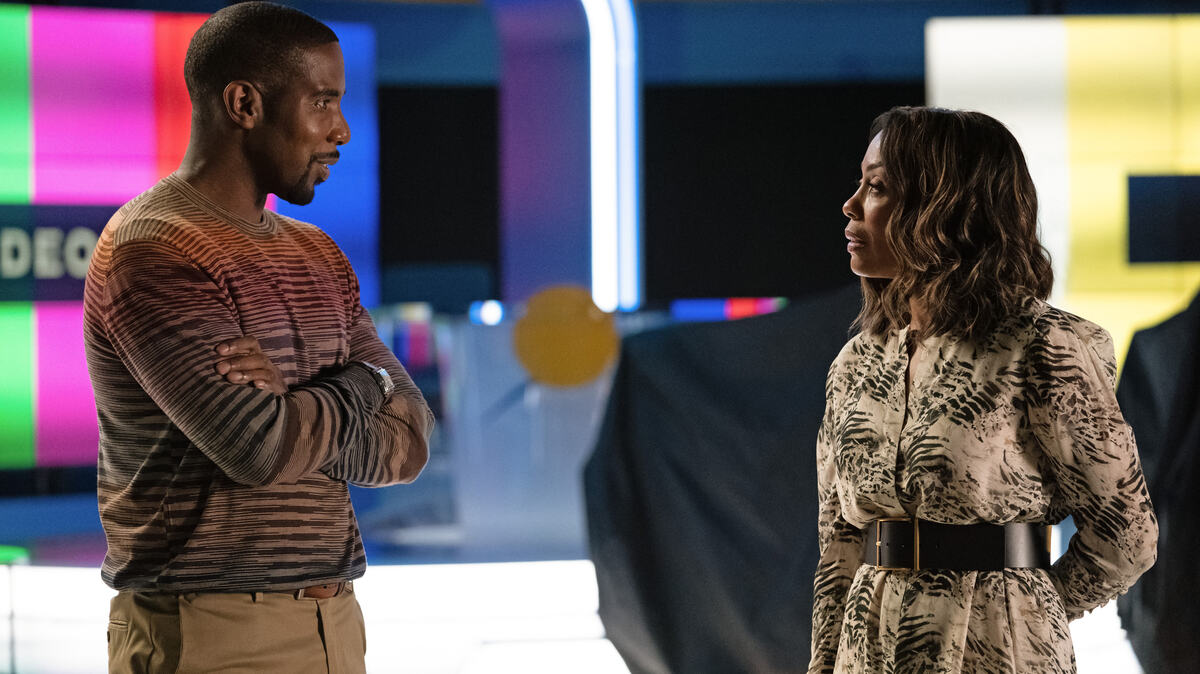 Daniel (Desean Terry) is looking for some help from Mia (Karen Pittman).

Where we start: I don’t know how Dave Grohl became the go-to Gamest Person In Show Business, but here’s to you, Dave Grohl. Here’s to you, Foo Fighters, playing Alex’s comeback show.

Stella is feeling annoyed at how well Cory’s “wall of blondes” strategy is going, but she can’t deny that the audience loves it, which I cannot stop finding completely implausible, since they saw these women together for three weeks almost a year ago.

If you liked Poor Mitch sitting around cancelled in Italy, perhaps you’ll like Poor Yanko, who’s getting yelled at on Twitter for having referred to Punxatawney Phil as his “spirit animal” on Groundhog Day. Social media makes this a huge thing, he has to make a big on-air apology, and so forth. Not included in this story: Any real opportunity for anyone — ideally a Native American person, but I would have accepted anyone — to actually explain why stuff like this actually bugs people. Mia speaks the words “cultural appropriation,” but that’s pretty bare-bones. If you must do this kind of story, I feel like you should at least give a fair airing to what the objection is. I don’t know who asked for this story, but it wasn’t me. (Steve Carell, Valeria Golino) Apple TV+ hide caption 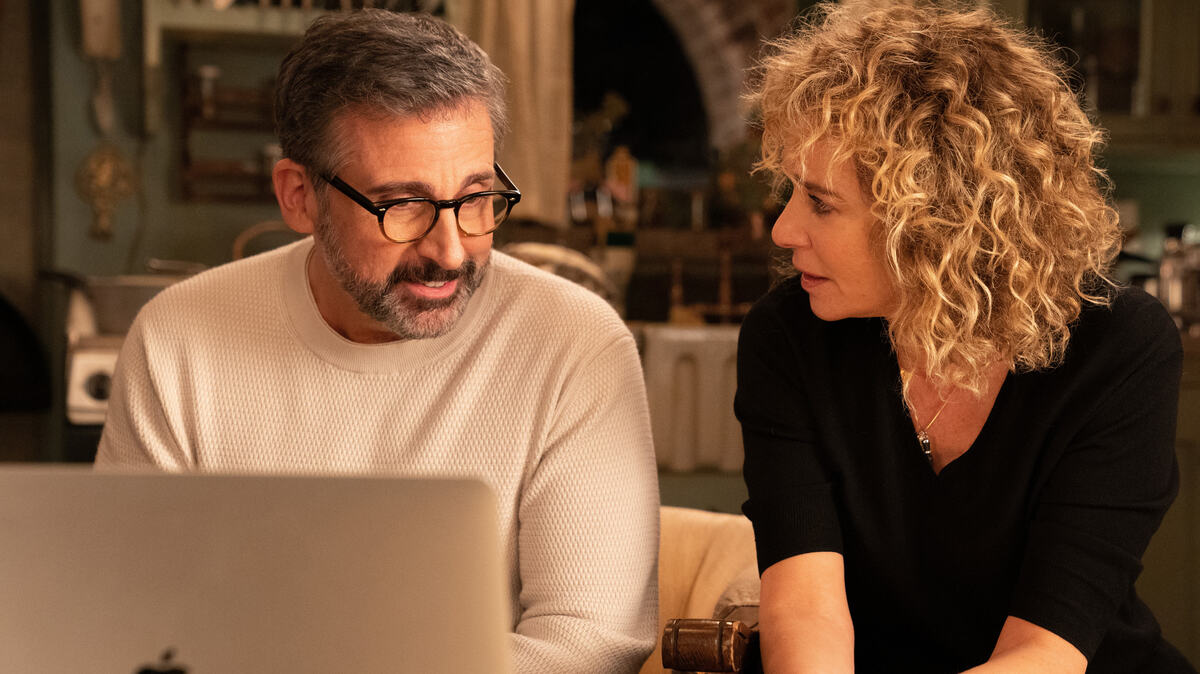 I don’t know who asked for this story, but it wasn’t me. (Steve Carell, Valeria Golino)

Poor Mitch goes on a fun date with Paola, because he’s helping her out with her documentary about sexual violence, and just … I wish I had stayed back at the villa. While Paola is interviewing a professor, Mitch takes a call from Paige, who tells him that someone is trying to plant a nasty story about Hannah in the press, and she suspects it’s him — but he knows it’s Fred “Even Worse Than Mitch” Micklen.

So Mitch, suddenly interested in Hannah’s family’s best interests, calls to tell Cory that he’d better settle the lawsuit and put a stop to all this. Cory isn’t really interested in a morality lecture from Mitch, and guess what? Neither am I! Later, back at Paola’s place, she affectionately reaches over to kiss Mitch on the cheek, and he says “Don’t do that!” like he’s very upset, and apparently now Mitch is afraid of affectionate touch because he feels so bad? Is this a “Mitch heals his trauma” story? My goodness, I hope nobody strains a muscle reaching for that angle. In other news, the professor Paola interviewed has COVID, so now they have to quarantine together. And now you know why Poor Mitch was in Italy: to serve this story. 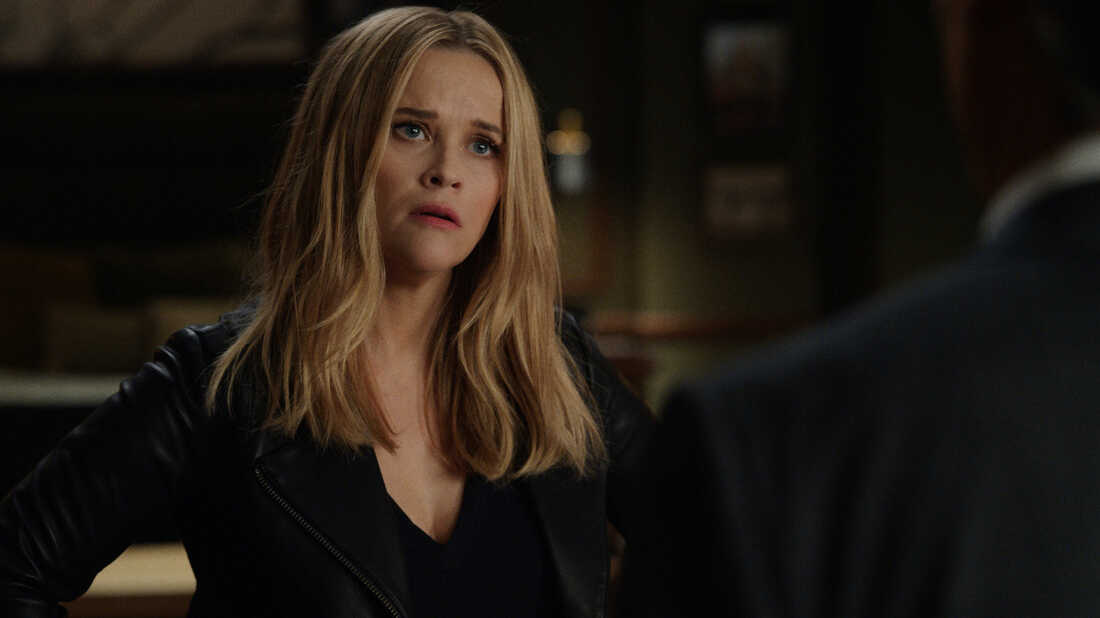 Bradley (Reese Witherspoon) has a lot on her mind. Apple TV+ hide caption 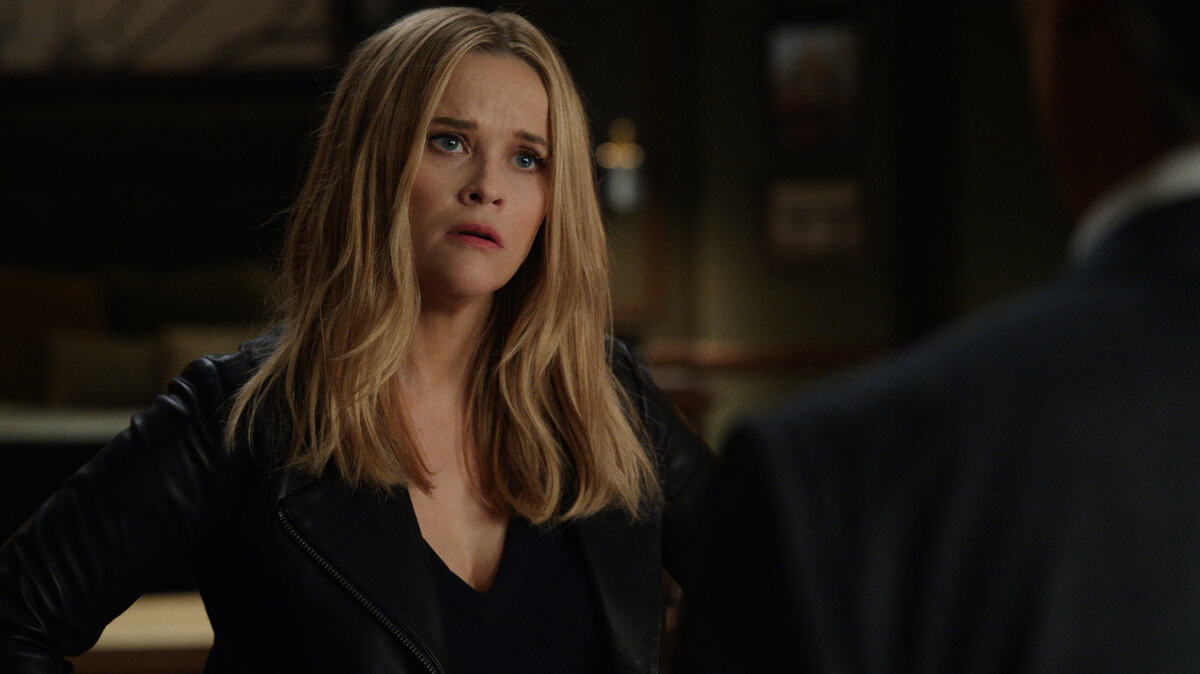 Bradley (Reese Witherspoon) has a lot on her mind.

Bradley and Laura: A confusing drama

Bradley and Laura are now sleeping together — Laura says, “For someone in the closet, you sure know your way around.” “I’m not in the closet,” Bradley says, “I’m just not actually a lesbian.” I will grant you that this is not my area of expertise, but what a weird thing to say to the woman you just had sex with! Not because you have to be a lesbian to have slept with her, obviously, but this kind of flat “eh, it’s more that I have nothing to be in the closet about” thing is … odd at this moment, I think? Since she didn’t say you were a lesbian; she said you were in the closet?

While she’s getting dressed, Bradley unloads the story of the events that followed last season’s finale, at long last: After Bradley and Alex made their big move, Fred, who was the CEO, was put on leave, while Cory, who was the head of news, was fired. Alex bolted, and Bradley was suspended. But then — and stay with me here — while Bradley, who had been in her job for three weeks, was still suspended, she went to the board and demanded that the Fred be fired and Cory be not only rehired but given Fred’s job, and they were like, “Sure.” So Cory became CEO and lifted her suspension, and she and Cory got to be really good friends. And that’s why she’s going to get him to give her the position moderating the presidential debate, ta-da!

Look … a certain lack of realism is to be expected on a show like this, but making it seem like one person who had been in her job for three weeks would have the power to force the board of her network to do what she said kind of trivializes how much risk there actually is in standing up to your bosses. Three weeks on the air, when you were not previously famous, is not really going to imbue you with the power to topple a CEO and replace them with someone who just got fired by yelling at the board.

Anyway, Laura tells Bradley that Cory may be fired anyway now, because the company is losing so much money on the streaming service they’re trying to launch. (There are some yuk-yuk “another streaming service?” jokes here that are supposed to be funny because this is airing on Apple TV+, and they would land better if the service were doing better or the show were better.) Laura’s bizarre piece of imagery: “The company’s balance sheet looks like a hemophiliac’s used Band-Aid.” That is … a sweaty, sweaty line, right there, wowza. Anyway, Laura tells her to make nice with Cory and the network for the time being.

So Bradley goes to visit Cory, and she’s trying to make up with him, and even though she says it’s about their friendship, he knows it’s really about moderating the debate. He declares his devotion to her, but tells her that it’s probably going to be Alex moderating, and he can’t use two straight white women, so Bradley is out of luck.

When Bradley comes back and explains all this to Laura, Laura’s interested in the fact that she’s identified at work as a straight white woman (this is what Laura meant by being in the closet), and Bradley gives her the whole “I hate labels” talk. But Laura tells Bradley that being a queer journalist would actually be good for her career, unlike when Laura was younger and not out at work, and rumors about her sexuality got her pushed out of her job. Laura kind of wishes Bradley would embrace it in a way that she herself couldn’t, but Bradley doesn’t want to “use her identity” like that.

Laura points out that she already uses an identity, it’s just not her real one. Laura also calls Bradley repressed, and to prove she’s not repressed, Bradley breaks a vase, which is not a thing a real person would do. Anyway, Laura essentially tells her “well then scram, and by the way, pay for my tchotchke,” and Bradley goes. She thinks about Laura’s advice, though, and she ends up almost telling Stella she’s bisexual (as a way to promote herself as a debate moderator!), but she chokes at the last minute and sells herself on the basis that she’s from a “conservative southern background.” 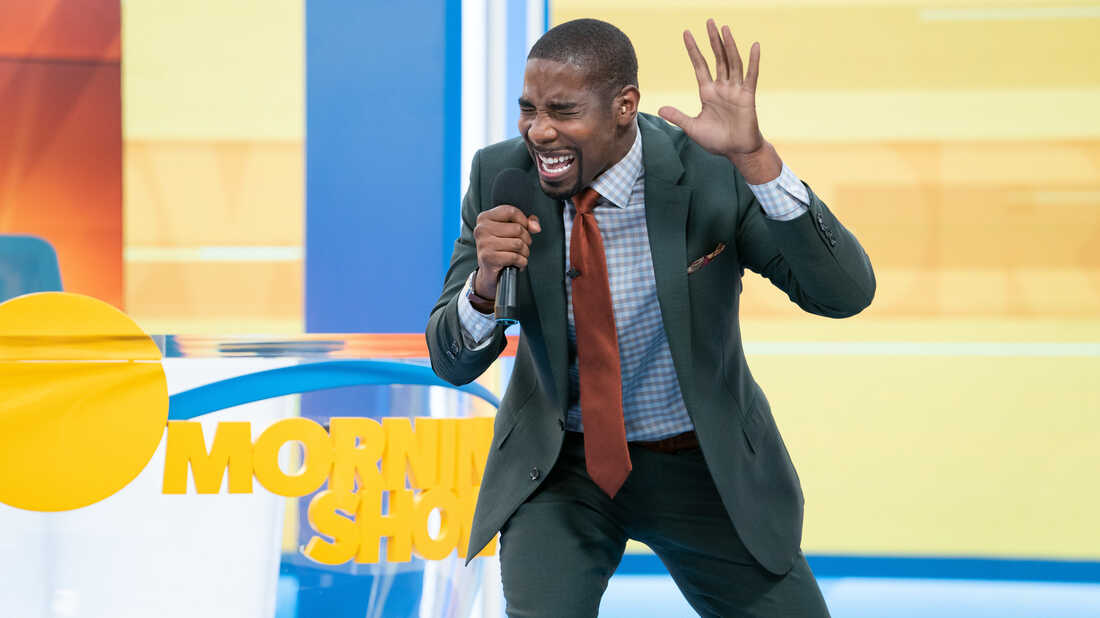 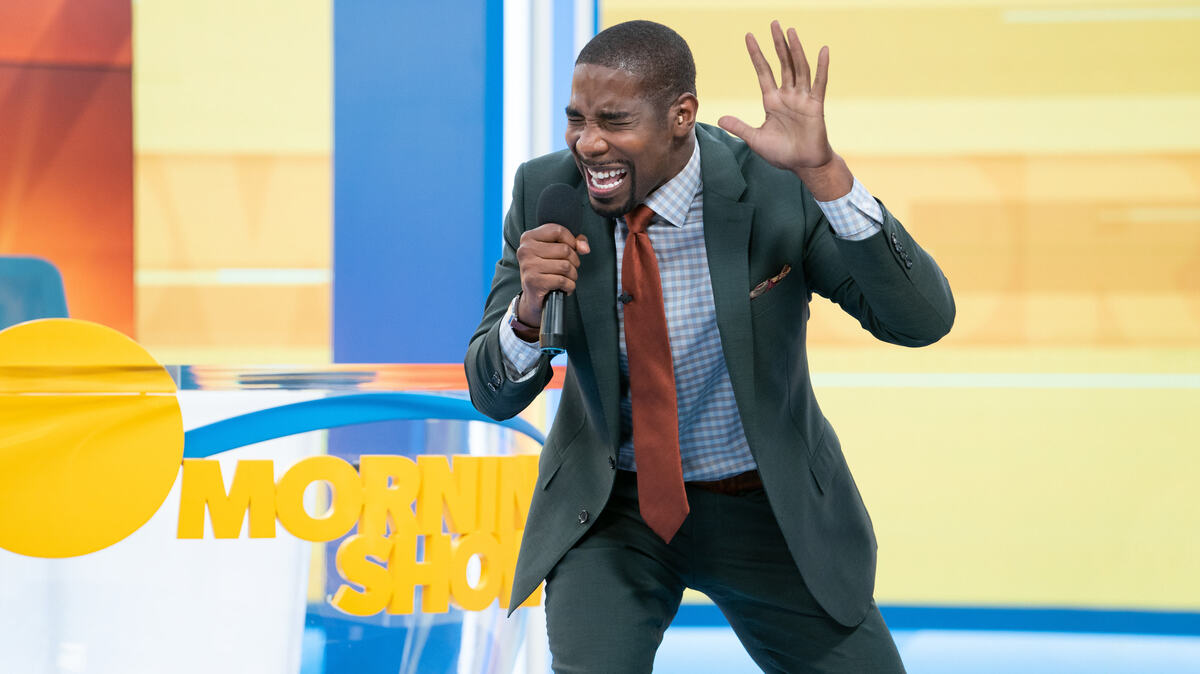 Daniel is back from China and eager to talk to Mia. He would like her help addressing racism at TMS and at UBA. And he would like her to start by pushing for him to moderate the debate. Mia takes up his cause with Stella, but Stella says that Daniel has “reached the level of his charisma” (which is one of the most quietly devastating insults I have ever heard) and she doesn’t think he has the “it factor” necessary to be as big a star as he’d like to be.

And because Cory, who’s her boss, wants Alex to moderate, Stella has to go and try to sell Alex on doing it, even though she herself didn’t even want Alex to come back at all. Alex responds by calling Stella a “punk” behind her back to Chip, who tries to oh so very gently let Alex know that Stella is the president of news? So maybe don’t call her a punk? It’s impossible to tell whether the show is consciously writing Alex as someone who dismisses younger women of color in a way she would probably not dismiss anybody else, but there you have it. (Again, these people! Are villains! Let them be villains!)

Meanwhile, Mia breaks it to Daniel that he’s not getting the gig because of said “it factor” concerns (which he points out are impossible to tease out from racism), and Daniel expresses his frustration that it’s going to be another straight white person (namely Alex, if Stella has her way).

And then … the show is sort of not clear about whether he’s trying to blow up his career or show off his charisma, but Daniel takes advantage of a sudden opening in the show to sing Neil Diamond’s “America.” Everyone is gobsmacked, and I don’t know whether we’re supposed to believe that a live show has no plan in place if they need to fade out a person singing a song and vamp to fill some time, nor do I think a live show would just let you sing an unplanned song on a live broadcast without … you know, securing the music rights? These people sometimes feel like Martians. Martians who have never done television before.

After Daniel’s stunt, Stella visits him in his dressing room, and while we don’t see their conversation, he does not look happy after that. You can tell that a character isn’t being given enough clarity when you can’t tell whether he was trying to help his career or flipping everybody the bird. 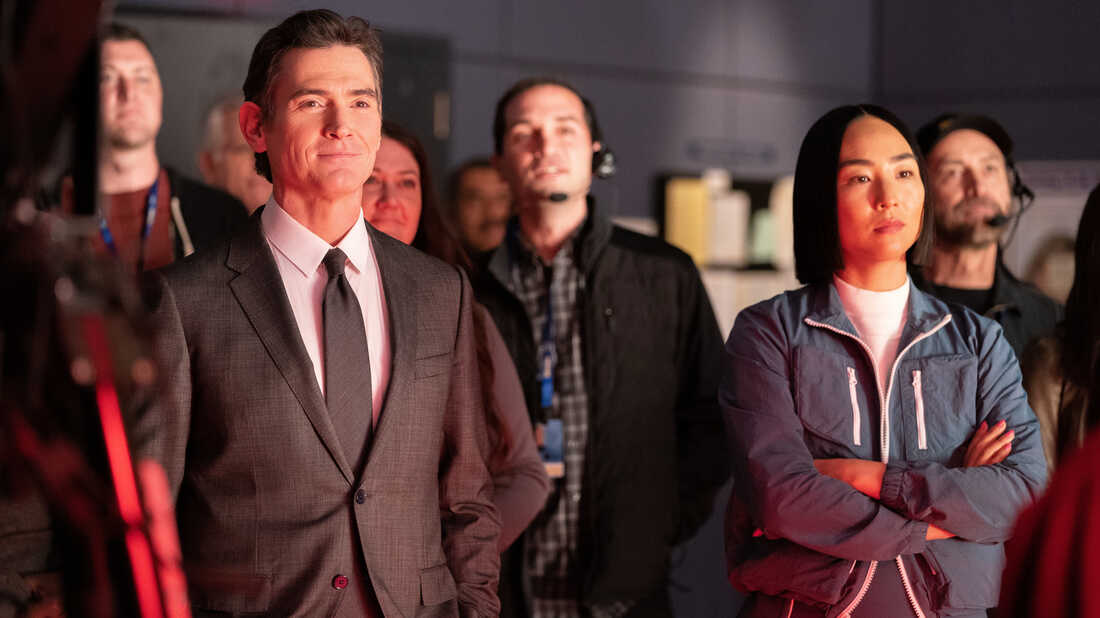