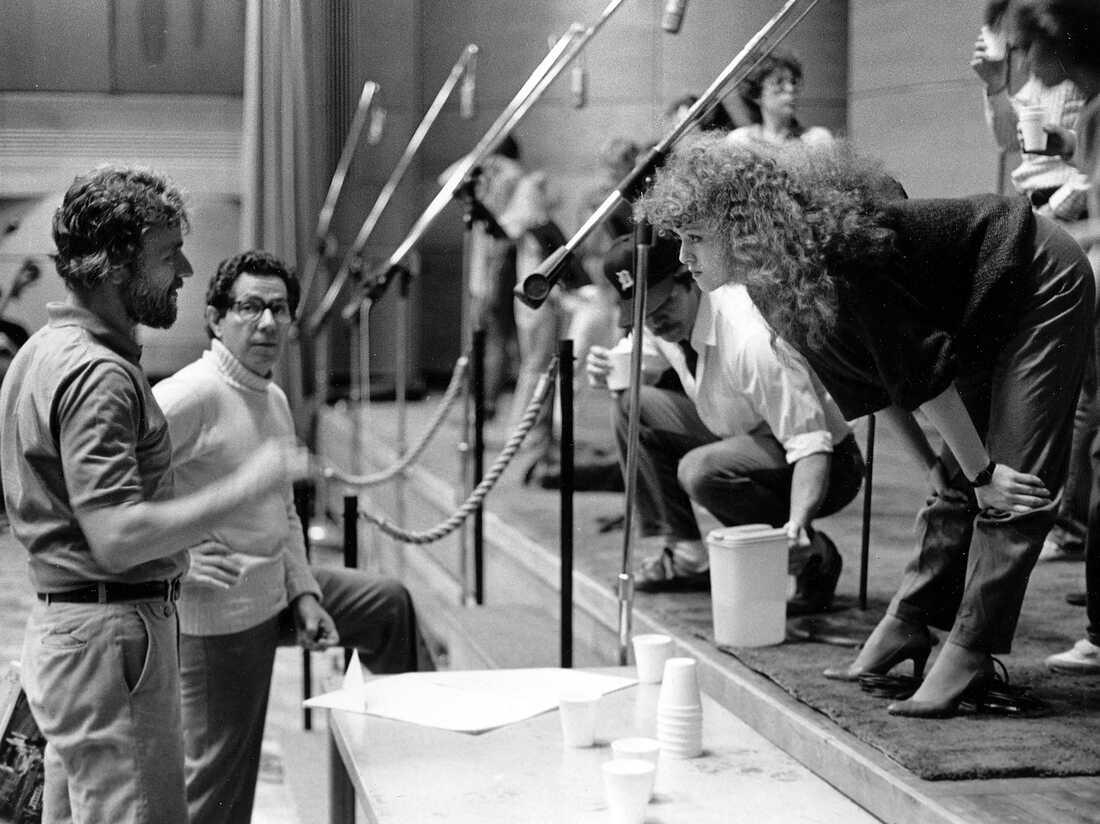 Bernadette Peters leans forward to discuss the recording of the “Sunday in the Park with George” album with Stephen Sondheim and producer Thomas Z. Shepard in June 1984. Marty Reichenthal/Associated Press hide caption 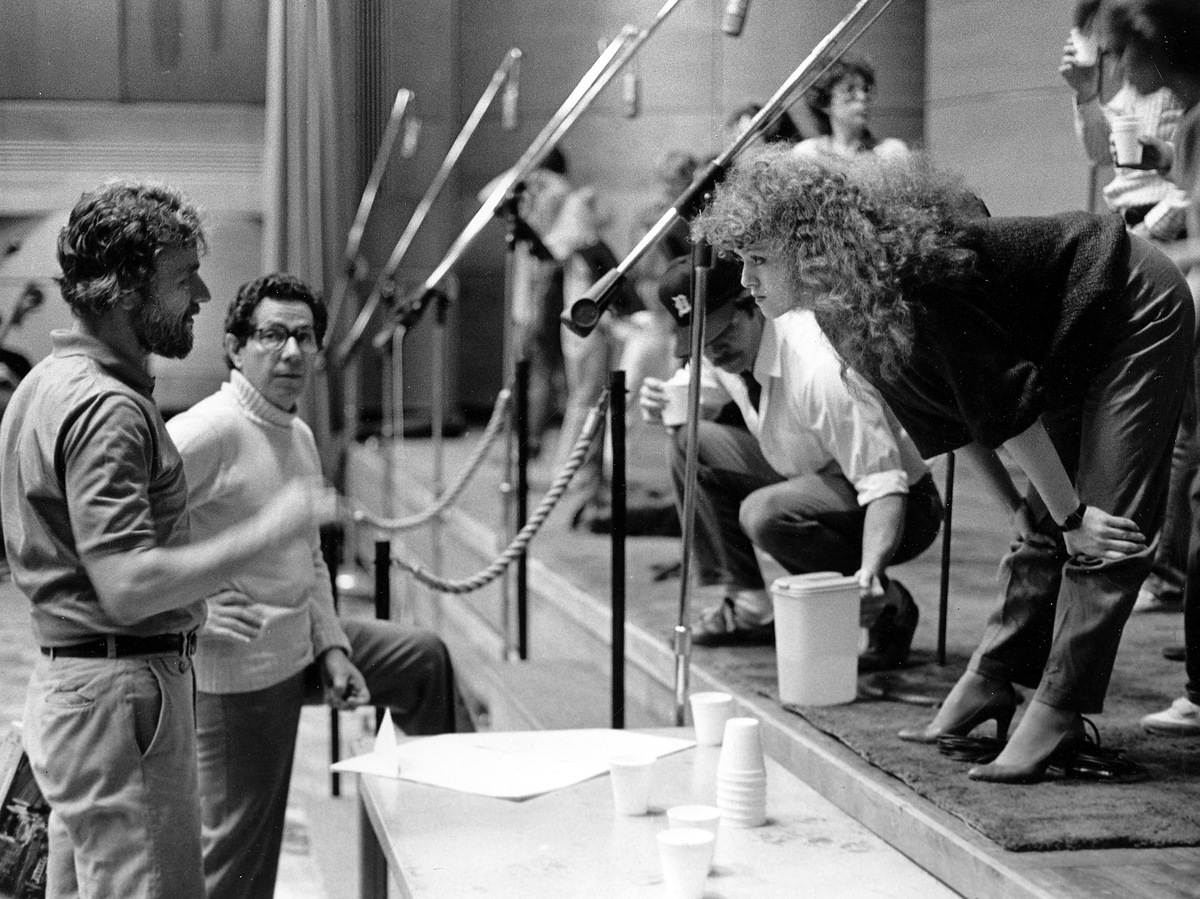 Bernadette Peters leans forward to discuss the recording of the “Sunday in the Park with George” album with Stephen Sondheim and producer Thomas Z. Shepard in June 1984.

On the day of Stephen Sondheim’s death, creating a list of his songs you will never stop playing is to invite an argument — and I do.

Sondheim died at 91, and I encourage you to read every obit, every snippet of historical context. I can offer only the fact that, almost always, on some level, there is Sondheim music in my head; it takes almost nothing to nudge it from sleep and get it tripping across my lips as I do the dishes or drive my car.

I wasn’t so much a Sweeney Todd person — it freaked me out. I was very much a Company person. I watched a VHS tape of Into The Woods when I was babysitting in high school, and I never stopped loving it. A dear friend took me to Follies. I sent another friend a clip from Sunday In The Park With George after he had a professional disappointment.

I invite you to hear mine, but to love yours, however you first heard them.

1. “Getting Married Today,” from Company

I don’t remember why, but one day back when we all still worked in-person at the NPR offices, Ari Shapiro came by my desk when I wasn’t there and left me a note. It said: I came up here to rattle off the lyrics to “I’m Not Getting Married” for you from memory, and you decided to be gone. What, I ask you, could be more important than this? – Guess (which is also the last word of another Sondheim song. Know which one?) 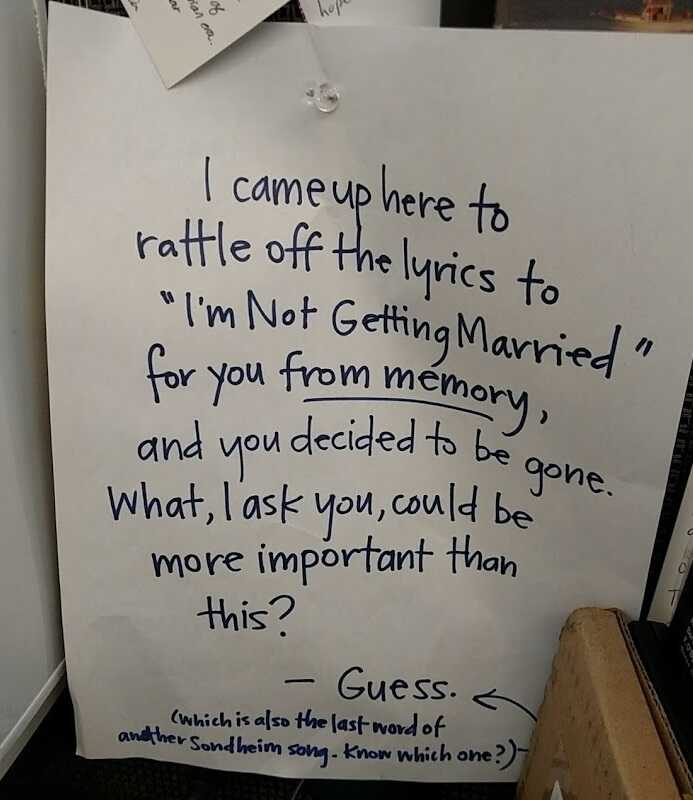 “Getting Married Today” is a song in which a woman expresses her extraordinary worry on her wedding day, repeatedly declaring that in fact, she will not get married after all. (Before changing her mind in the end.) It is a song that is also a sporting event, because — as this note suggests — the barrage of rapid-fire lyrics entitles you to bragging rights. But lest you think that means it is only patter, when Beth Howland is blasting her way through it like a champ during the D.A. Pennebaker documentary Original Cast Album: Company, Sondheim says to her, “I don’t want to upset you, but I’d love to have the tune.”

This innocuous title belongs to a song that is, as it sounds like it should be, about the fact that we are rarely as isolated as we feel. But because Sondheim is Sondheim, it appears in a moment of deep grief, and it casts this fact as part comfort and part warning. You are not alone, it says, because people will be there with you, to love you. And you are not alone, it says, so be mindful of the consequences of your actions. “You move just a finger/say the slightest word/something’s bound to linger — be heard.”

3. “Move On,” Sunday In The Park With George

A vision of a woman appears to a frustrated artist and urges him to continue with his art. It would be so easy for this song to collapse into a pep talk, but one of Sondheim’s many gifts was his understanding of creation itself — which is part of why he makes such a delightful character in the just-released Tick Tick … Boom.

George does not just need encouragement, he needs to be told that there is no certainty in trying to build beauty, and that an artist continues anyway. A soaring duet that originally brought together Mandy Patinkin and Bernadette Peters, two Sondheim muses, it speaks with specificity to creative insecurity: “Stop worrying if your vision is new/let others make that decision, they usually do.”

A lot of the Sondheim faithful see themselves as devotees of one show above all others: they are a Sweeney Todd person, a Sunday person, a Follies person. I am, more than anything, a Company person.

The story of Bobby, a man surrounded by couples and terribly skeptical about marriage, ends with this climactic admission that what is terrifying about intimacy is the same thing that is precious about it. “Someone to need you too much/someone to know you too well/someone to pull you up short/to put you through hell.” Although it does have a bridge, this song mostly repeats and builds as Bobby is urged on by his friends — unlike a lot of Sondheim songs that weave and change. Along the way, it delivers little stunners like “someone to crowd you with love.” And about that bridge? “Make me confused/mock me with praise/let me be used/vary my days”? It’s an especially effective combination of a big, big moment in a song and a superficially mundane sentiment like “vary my days.”

5. “Send In The Clowns,” A Little Night Music

I will die on this hill: Few songs have gotten as unfair a deal as “Send In The Clowns.” At some point, the combination of the fact that it was a pop hit for Judy Collins and the fact that it has “clowns” in the title started people down the road of thinking it was a corny easy-listening tune, when it’s actually — like so much of Sondheim — quietly, memorably devastating. Seek out one of the performances from Dame Judi Dench, who brings out the tragedy in this story of two people who fear that they have missed their moment. The clowns are about absurdity, foolishness, and the images are, over and over, devastating: “Me here at last on the ground/you in mid-air.”

Up there at #1, when Ari’s note pointed out that “guess” is the last line in another Sondheim song, he was talking about “Could I Leave You?” Follies is a great one if you like your musicals … well, furious, both in terms of anger and, at times, in terms of frenetic energy.

This particular number allows a woman a moment to finally tell her husband how much she does not love him, but perhaps because so much of Follies is about the stage, it begins as a much more conventional love song thematically reminiscent, of course, of “If Ever I Would Leave You” from Camelot. It does not end in the same emotional place, let us say.

Well, I told you I love Company. And one of the things I particularly love about it is that while Bobby ultimately seems to see the value of marriage through the eyes of his friends, his friends are not spared in their treatment of their “extra” single friend.

Sondheim always hides a knife in a cupcake, so of course you get Bobby singing this very cheery “ports in a storm/comfy and cozy” business about how close they all are, and then they join in and sing about how much they love him, and soon we arrive at: “Who is a flirt, but never a threat/Reminds us of our birthdays which we always forget?” Bobby is praised for helping with dishes, never complaining, listening to them complain, keeping their secrets from each other — his friends are drafting off his singleness even as they fret about it and try to change him.

The genius of Into The Woods is that the first act is like a regular fairy tale with happy endings, and the second act complicates them all: people become unfaithful and get killed and stop loving each other in the same way. “Ever After” is the bridge between these sections, coming right at the end of the first act, and if you don’t pay too much attention to it, it really does seem to be a conclusion of sorts. In fact, it is explicit on this point: “Journey over, all is mended, and it’s not just for today/but tomorrow and extended, ever after.”

Unfortunately, you begin to sense that something is not quite right. But what I love about it is partly that Sondheim had a way of writing these absolutely devilish, almost tossed-off melodies that I think of as Bernadettes — as in, “I’m pretty sure only Bernadette Peters can sing that exactly right.” And “Ever After” has a bunch of them, mixed with playful rhyming that came to mind when I first saw Hamilton. “I was perfect,” the witch sings, “I had everything but beauty, I had power, and a daughter like a flower in a tower.”

I know, I know — he only wrote the lyrics. Leonard Bernstein wrote the music. And I know sometimes he’s talked about not even liking the lyrics. But long before I was ready for the emotional notes of Company or the second act of Into The Woods, I listened to the cast album of West Side Story at home endlessly, endlessly.

Apparently, as a small child, I was not prepared for the themes of resentment and intimacy that populate his other work, but murder, I processed just fine. I will always credit my attachment to musical theater in general to those cast albums I listened to as a little kid, long before I knew anything about composers — this one, Annie, A Chorus Line (apparently those themes were also fine?). And while I will never stop appreciating the tragedy and the reach of some of these from an adult perspective, this was kid music for me.

10. “Finishing The Hat,” Sunday In The Park With George

How not to end with Sondheim’s own song about the power and cost of creation? He called his two coffee-table books of lyrics Finishing The Hat and Look, I Made A Hat. There are some amazing videos of Sondheim teaching young musicians that aired on television many years ago, and seeing the way he would correct a breath or the finest point of pronunciation — gently, kindly, but resolutely — drives home how serious he was about what he made.

“Finishing the Hat” is a song that showcases some of his favorite moves, including that little bauble that repeats when George sings “win-dow.” But more than anything, I think of this song as the work of a writer who was incredibly imposing and incredibly exacting, and saw creativity as something wholly absorbing, whether it was the creation of a song or a painting or a hat.